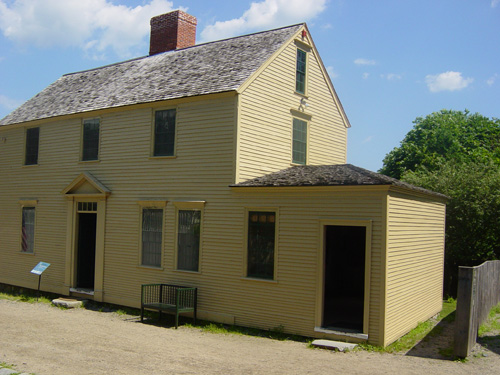 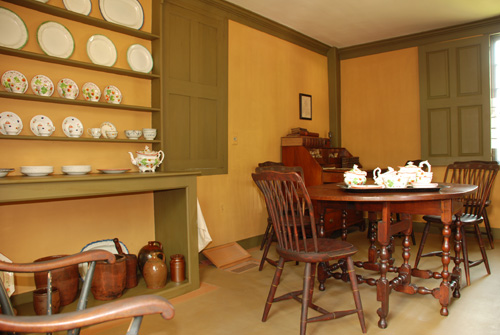 For a Virtual Classroom link to the Rider-Wood House, click here.

The Rider-Wood House was built about 1780 by Samuel Jackson, a tanner, and was purchased by John Rider in 1809. Rider was a trader and the addition to the building on the west side probably served as his shop.

When John Rider died, his widow Mary continued to run the shop and the house on her own. She helped a number of nieces and nephews immigrate to Portsmouth from England and schooled them to support themselves by helping her. When she died in 1861, at the age of 92, she left a large portion of her estate to St. John's Church in Portsmouth for the care of the poor and the support of foreign missions. She also left property to many relatives and friends in her native England and among her neighbors at Puddle Dock. The house that she lived in for over fifty years went to her nephew James Wood.

The house is typical of the simple four-room dwellings that were built in Portsmouth in the latter part of the 1700s, many of which still stand. The two sheds to the west and south were added by John and Mary Rider.

Though plain, attention was paid to such refined details as a stairway embellished with a fine-tuned newel post and beautiful scrolled brackets. The west fireplace displays an ogee-ended frieze and a denticulated mantel shelf. The original eight-panel front door is still sound, accented above with a four-light transom topped by a triangular pediment supported by simple pilasters. Such details clearly show that middle-class tradesmen like Samuel Jackson, though not wealthy, took pride in their homes and had a definite sense of style. These elements are noticeably missing from houses built for tenant occupancy in the 1800s.

Archaeological excavations at the site, particularly focusing on the privy site in the backyard, have provided detailed information about the Riders, Woods, and other families who have lived here. They have also revealed that George Walton operated a tannery here prior to the 1770s.