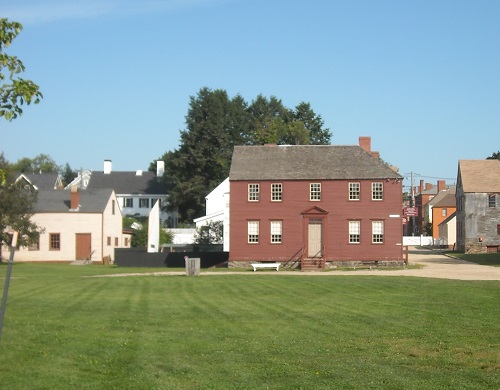 Joshua Jones purchased this c, 1790s building in 1796. Born and raised on the Jones family farm near Little Harbor on the outskirts of Portsmouth, Joshua had decided to seek his fortune in town.

At various times he listed himself as yeoman, farmer, weigher of grains, truckman, and trader -- typical of many men in the 1800s  in Portsmouth. The location of his house, where Atkinson Street ended at Puddle Dock and overlooked the bustling wharves would have been ideal for someone pursuing such a variety of work. The large size of the house with its ell was also an advantage for a family with ten children. Jones lived in it for nearly half a century from 1796 until his death in 1843.

Architecturally Jones House provides two different impressions, typical for the 1790s when an older style was slowly making way for a new one. Approached from the west its gabled roof and pedimented doorway make it appear typical of many 1700s, Georgian-style Portsmouth houses. Viewed from the east, its hipped roof and shallow roof overhang link it more closely with the Federal period.

Jones House underwent many alterations after it left the Jones family, but the lower front room to the east retains its Federal molding and wainscoting. The west front room, with its later Greek Revival decoration, provides an excellent opportunity to contrast styles.

Jones House has been restored through the generosity of Mr. & Mrs. Edward V. French.

This building is now Strawbery Banke's Discovery Center, a hands-on activity area for visiting families and schoolchildren. The rooms are set up for play with historic games, different cooking arrangements, a shopkeeper’s counter and, in the adjacent play-yard, a sailboat.