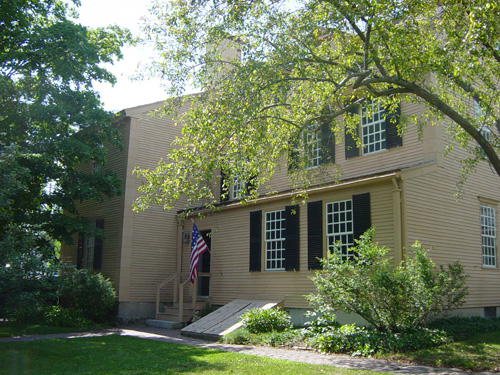 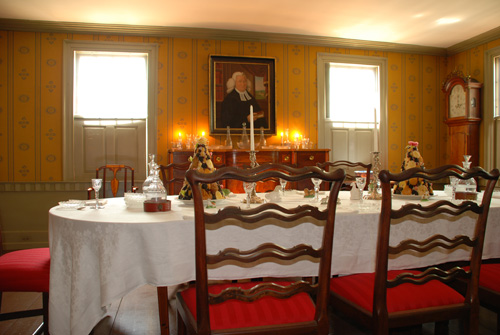 Exterior from the rear and interior dining room. (Crowley Collection)

The Chase House, at the corner of Court and Washington Street, is one of the grandest Georgian structures at Strawbery Banke. The Chase Family, Portsmouth merchants, lived in the house for over a century.

Chase House was built about 1762 by John Underwood, a mariner from Kittery. Underwood sold the house to his in-laws, the Dearings. This may have been when much of the finished work was done on the house, especially the elaborately-carved woodwork, inside and out as Ebenezer Dearing was a noted local ships’ woodcarver.

In 1766, only three weeks after repurchasing the house, Underwood mortgaged it to Barlow Trecothick and John Thomlinson, London merchants and English agents for the province of New Hampshire. The house remained part of the Trecothick estate until 1799 when it was purchased by Stephen Chase, a successful Portsmouth merchant who had been living in the house for a number of years with his family.

Stephen Chase was a graduate of Harvard College. His wife Mary was related to the famous Pepperrells of Kittery, merchants involved in the West India trade. Chase's own business was located on the large Portsmouth Pier at the foot of State Street. When Stephen Chase died in 1805, his widow and two sons, William and Theodore, both merchants, continued to live in the house.

The last Chase to live here was William's widow, Sarah Blunt Chase, who died in 1881. At that time Theodore Chase's son, George, a railroad magnate and philanthropist of Boston, bought the house and donated it as a home for orphaned children. When the needs of the Chase Home for Children outgrew the house early in the twentieth century it was purchased as a residence by Mrs. Thomas Bailey Aldrich who had opened her husband's boyhood home, just two doors down the street, as a memorial to him only a few years before.

Architecturally Chase House is one of the richer dwellings in Portsmouth and a fine example of the classical influence on Georgian architecture. The front doorway (HABS 26) is capped by a segmental or curved pediment. The door is framed by fluted pilasters topped by delicately-carved Corinthian capitals, and supported by paneled pedestals. The side door (HABS 30) has a triangular pediment and fluted pilasters with Ionic capitals.

The interior of The Chase House is even more sophisticated with attention paid to detail. The architectural highlights of the parlor include the intricately-carved frieze over the fireplace (HABS 94), painstakingly carved from white pine by a master craftsman, perhaps Ebenezer Dearing, full-length sliding shutters, wainscoting, denticulated mantelpiece and cornice, and the arches on either side of the fireplace.

In 1807 James Nutter, a joiner who was at that time "the head of his craft" in Portsmouth, boarded at Chase House. Nutter appears to have exchanged labor for rent, for it was at this time that the dining room was remodeled in the newer Federal style. The simplicity of the reeded wainscoting, shallow cornice, and mantelpiece contrasts sharply with the bold and elaborate Georgian woodwork in the parlor. The stairway balustrade (HABS 92), with a beautifully carved newel post, is composed of balusters of three types, a pattern typical of Portsmouth. The two front upstairs chambers contain excellent woodwork, with especially wide panels over the fireplaces.

The Chase family is one of the best documented in the neighborhood due to an extensive manuscript collection owned by Strawbery Banke, and the house is furnished based on the 1805 inventory taken at the death of Stephen Chase, and 1820 when Mary Chase died. These documents, listing the furniture and objects found in each room, provide a good idea of how the family used each room and reveal the living patterns of the people in the house. In general, much less furniture and fewer carpets and curtains were found in the house than is often supposed. One of the best examples is the parlor which contained little more than rows of straight-back chairs along the sides of the room.

Chase House was restored through the generosity of Miss Nellie McCarty.