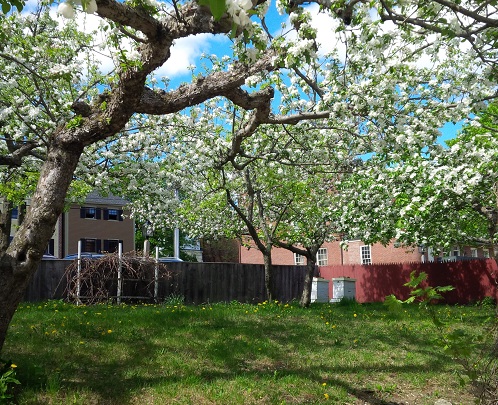 HEIRLOOM ORCHARDS
The Museum’s largest orchard, opposite the Marden-Abbott Store, was planted in 1964 on a site that had once been the formal garden and orchard of the James Bartlett mansion. This orchard contains rare, historic fruit varieties favored by early New Englanders that help preserve and teach this region’s culinary and landscape history. Hands-on programs in the orchards include spring pruning and apple harvesting.

The orchard next to the Shapiro House produces apples that are also among the fruits that have become increasingly rare or extinct through industrialization, loss of farmland, and hybridization for mass-production. New England alone used to have over 1,500 distinct varieties.

The orchard next to the Sherburne House contains Roxbury Russet apples, the oldest named apple variety in North America. Strawbery Banke collaborates with local brewers and cider-makers to use the museum's harvest in traditional gruits and hard cider while helping to preserve the heirloom trees.