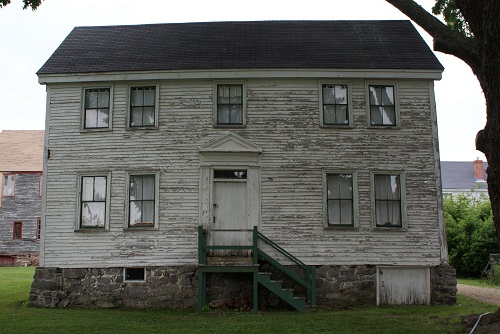 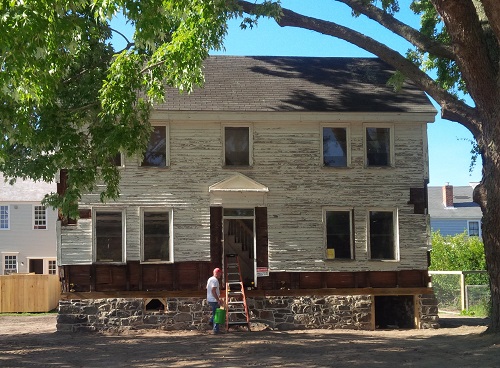 Yeaton-Walsh before and during (current 2016) rehabilitation.

The surname Walsh features prominently in the history of Strawbery Banke.  Two of its houses bear the Walsh name. The earlier, Georgian house was the home of a ship captain and successful businessman, Keyran Walsh.

The second is the Yeaton-Walsh house built by Thales Yeaton.  Michael Walsh, the first Walsh House inhabitant, around 1850, was listed as a sawyer by occupation. Although the property changed owners over many years, the Walshes rented, and at some point purchased, the property, which then remained in his family well into the twentieth century.

This simple, four-room dwelling on Mast Lane was built sometime between 1794 and 1803, probably for investment as a rental property.  Just as today, there always was a need for this kind of functional, plain housing for local craftsmen, seamen, laborers, and others who worked in the area.

The Yeaton-Walsh House has been much altered over the years.  However, the house retains many original architectural features such as cornices, doors, and fireplaces.  Also original are the handsome scrolled brackets and heavy handrail of the stairway.  The pilaster capitals on the exterior doorway, typical of eighteenth-century Portsmouth work, indicate the importance of style in even the most simple structure.

The Yeaton-Walsh House is one of the two remaining houses on the site still in need of total restoration.  For many years it has served as the Museum’s repository for archeological materials.  Included in Phase III of the Heritage House Program, Yeaton-Walsh house is to be restored and made available once again as a rental property fulfilling its original historical intent.

The preservation of the exterior and interior of  Yeaton-Walsh House and its conversion to an income-producing property is part of a campus-wide preservation project at Strawbery Banke, the Heritage House Program (HHP), an economic initiative to rehabilitate and lease 15 underutilized properties at the Museum. The objectives of this strategic effort are to preserve these historic houses to period condition so that they are an integral part of the museum, to recreate a community living and working together as it has existed at Strawbery Banke since the 17th century. By providing attractive residential and office rental space, these historic houses generate an income stream that ensures that each historic house will be maintained in perpetuity while guaranteeing a significant annual contribution to ongoing museum operations. The Yeaton-Walsh House Preservation Project is part of the third and final phase of this very successful Heritage House Program.

Tuesdays through Sept. 13, 2022, 5:30 - 7 PM
Enjoy acoustic music amid the summer splendor of Puddle Dock with Strawbery Banke's popular annual concert series. Each Tuesday evening from 5:30 - 7 PM, a variety of local musicians perform on the open-air stage. 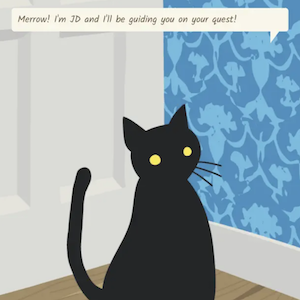 Download the BankeQuest App, a family-friendly quest that guides visitors throughout the Museum with a series of rhyming clues from JD the Cat! Developed by Graphic Details, Inc., the app is available for free from the App Store or Google Play.