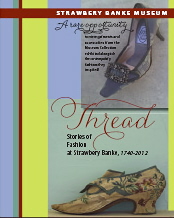 Strawbery Banke Museum’s 2012 exhibit, Thread: Stories of Fashion at Strawbery Banke, 1740-2012 depicted the people who lived in the Puddle Dock neighborhood of Portsmouth through costumes and textiles associated with their nearly 300 years of history. In addition to items from Strawbery Banke Museum’s extensive collection, Thread also showcased new fashion designs -- inspired by the Collection – created by some of the most dynamic designers, both established names and up-and-coming ingénues.

Portsmouth is no stranger to fashion. Once the fourth largest port in America, Portsmouth attracted goods from the ordinary to the luxurious, and kept up with the trends imported from Paris and London, from the time “Strawberry Bank” was settled in 1623

The contemporary designers who accepted the invitation to participate included:

The exhibit included displays in the Rowland Gallery and juxtaposed historic costumes in their appropriate period settings in the museum’s authentic furnished houses with the contemporary fashions to offer themed "vignettes. " More than two dozen items were displayed including:

Co-chairs Lawrence A. Larose and Janet Y. Larose hosted the Passion For Fashion Gala, including a celebrity designers runway show hosted by Austin Scarlett, champagne reception and VIP dinner on the grounds of the Museum on Saturday, June 30, 2012. The gala was a benefit for Strawbery Banke Museum.

The Thread catalogue is available at the TYCO Visitors Center.