The tall flag pole to the east of Puddle Dock and at the entrance to Prescott Park’s public gardens is so much a part of the landscape, it might get overlooked.  On January 9, 1766, what we now know as the Liberty Pole was raised by the Sons of Liberty in protest of the Stamp Act.  Nine years before the beginning of the American Revolution, the Liberty Pole was a rallying point for opposition to the Stamp Act. Charles Brewster, newspaper editor and author,  wrote a recounting of the pole’s erection in 1859:  “The commission is taken (i.e. the Stamp Act order) – on the point of a sword it is elevated and the procession moves down Vaugh and up King Street, bearing the trophy, hailed by the shouts of the “sons of liberty.”  They pass the parade… and proceed to Swing Bridge, on Water Street, where they erected a Liberty standard.  From that day Swing Bridge received the name of Liberty Bridge, and the motto – “Liberty, Property and no Stamp.” 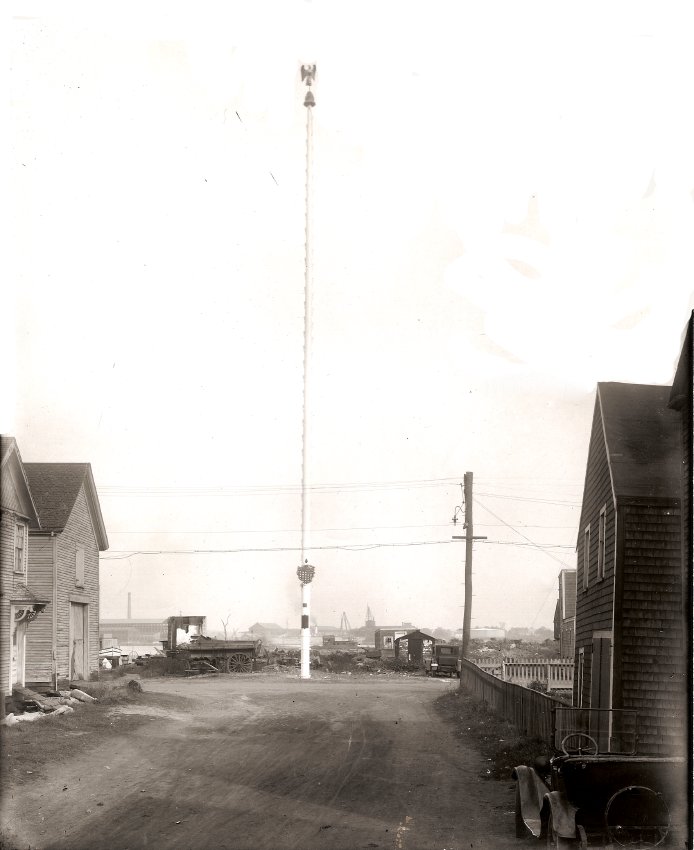 Portsmouth’s Liberty Pole is the oldest in America and a symbol of citizen engagement in times of war and peace, of local initiative and of the “grassroots” efforts for which Portsmouth is known.  On May 22, 1766, the town of Portsmouth celebrated the repeal of the Stamp Act by the British Parliament by placing a battery of twenty-one cannons nearby, dedicated to the King. Thirteen of these guns were fired on April 28, 1783, to celebrate the end of the Revolutionary War.

The original Liberty Pole was replaced on the Fourth of July in 1824 (as an extension of the City’s 1823 200th anniversary celebration), again in 1872 and, by a taller pole on the Fourth of July in 1899. In 1824 a carved and gilded pine eagle was placed atop the Liberty Pole. When that was replaced in 1978 it was placed on display in the old Portsmouth Public Library and now stands at the foot of the central “Staircase to Enlightenment” at the library. The current mahogany and gold leaf eagle was carved by Ron Raiselis, master cooper and wood carver at Strawbery Banke and placed in 2002. The original carved and painted shield at the bottom of the Liberty Pole was added in 1857 and was placed on display in Sheafe Warehouse (along with the second eagle) when it was replaced in the 1970s. The current shield was carved and put in place in 2016.

For the past two years, Strawbery Banke has partnered with the Haven School Project group to present a program honoring the history of the Liberty Pole.

Pictured above: A view of the Liberty Pole, to the east of Puddle Dock.  This c.1920 photo is part of the Garland Patch Collection (72.77)