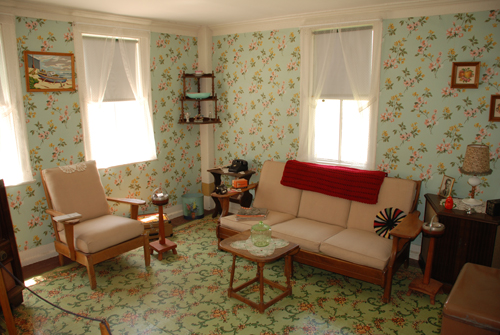 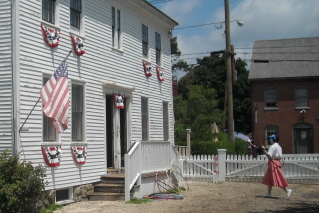 For a Virtual Classroom description of the Shapley-Drisco House, please click here.

This house sums up what Strawbery Banke Museum is all about. In one half of the duplex, it is 1795, where the Shapley Family lives and runs a store selling cargo from Captain Shapley's ships. The other half interprets how the Pridham Family lived here in 1955.

The house was built in 1795. John and Catherine Shapley were the first to live in this house, along with a household of at least three daughters and several unidentified boarders. John used as modest ship for commercial fishing and carrying goods in the coastal trade and during his absences, his wife and their teen-aged daughters kept the shop. Behind the shop, the family had their meals and did evening chores like sewing and bookkeeping in the modest wall-papered sitting room. Across the hall the “best parlor” and kitchen completed the downstairs, while four bedrooms plus attic provided ample living space.

As the neighborhood's fortunes changed over time, many houses were converted to multi-family dwellings. The left half of Drisco House is restored to depict a typical blue-collar family's apartment in this “Puddle Dock” neighborhood in the post-World War II years. The neighborhood was tight-knit; picnics and outings were popular, as was the Puddle Dockers baseball team and most neighbors worked at jobs in the Navy Yard.

The architecture of the Drisco House reflects the taste of middle-class traders of the 1790s. The exterior and interiors use the plainest forms and details available from local housewrights, who saved their opulent woodwork for wealthier Portsmouth families. Though successful, the Shapleys and Driscos seem to have felt no need to impress their neighbors.

When the house was converted into a duplex, alterations included installation of big window panes, two front doors, two vestibules, an additional stair (since removed), and installation of utilities, appliances and kerosene heat.