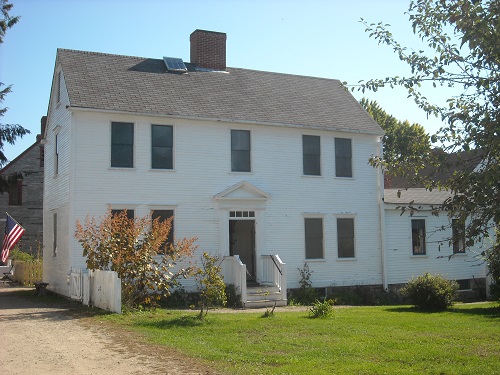 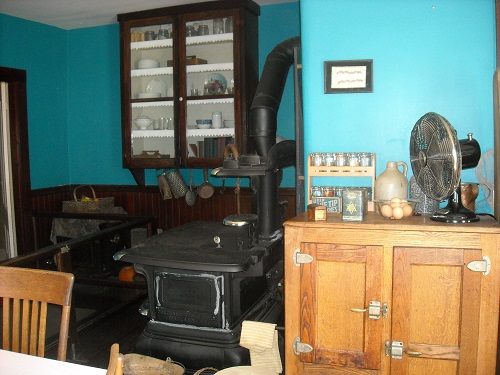 The Shapiro House exterior and the kitchen.

SHAPIRO HOUSE
For a Virtual Classroom tour of the Shapiro House, click here.

The Family
The Shapiro House was the home from 1909 to 1928 of Abraham and Sarah Shapiro, Russian Jewish immigrants, and their American-born daughter Mollie. Interpreted to 1919, the home shows how the Shapiros sought to balance their strong cultural identity with new opportunities in America. While Shapiro House is specifically about the Russian Jewish experience, it also reflects the early 20th-century multi-ethnic community at Puddle Dock, when half of its 600 residents were foreign-born.

Around 1900, immigrants from Ireland, England, Canada, Italy, Poland, and Russia lived in and around the Puddle Dock neighborhood, alongside native-born residents. Abraham and Sarah were part of a complex network of international families within the community. Born in Ukraine, Abraham Millhandler and Sarah Tapper emigrated to America as young, single adults to reunite with family members who had come earlier. Abraham changed his name to Shapiro, as had his older brothers, Simon and Samuel. In 1905 he married Sarah, his sister-in-law, reinforcing kinship ties that had been established in Russia, even as they made new lives in America.

Part of a small Russian Jewish community, these families relied on each other for financial assistance, jobs, and emotional strength. With other families they established a Hebrew School for their children, opened kosher shops, and founded the Temple of Israel to serve their traditional cultural and religious needs. They established new businesses, particularly the scrap metal yards which flourished at Puddle Dock into the 1950's. They became retail clothing merchants and shoe manufacturers. For most of his life, Abraham Shapiro worked in shoe shops and factories, loosely organized by kinship ties, that stretched from Lynn, Haverhill, and Newburyport, Massachusetts to Portsmouth and Epping, New Hampshire. In the late 1910's he owned a pawnshop that catered to sailors stationed at the Portsmouth Naval Shipyard. When he could, Abraham also invested in real estate - sometimes in cooperation with his brothers - a privilege denied Jews in Russia. The Shapiro brothers were also active in Temple of Israel affairs from its founding in 1905. In 1912 Abraham was a leader in the negotiations to buy and convert the Methodist Church into a synagogue. An archaeological field school in 2014 confirmed the presence of a mikveh, a ritual bath, created by Temple Israel in a house owned by the congregation just a block away.

Sarah Shapiro worked at home, taking care of their only child Mollie, maintaining a kosher home, and looking after a series of boarders, many of whom were newly arrived immigrants. Sarah's daily activity focused on her home, family, friends, and neighbors. Immigrant butchers, bakers, and grocers in and around Puddle Dock -- as well as her garden -- provided nearly everything she needed to observe strict kosher dietary laws and to celebrate the Sabbath rituals with her husband and daughter.

Mollie Mary Shapiro was born in 1909 into an extended family of aunts, uncles, and cousins. In 1920, when Mollie was 11 years old, virtually all of the immigrant children at Puddle Dock were attending school. Mollie excelled in public school, completing high school and graduating from the University of New Hampshire. As an only child, she was the focus of all her parents' hopes and dreams. They hoped she would maintain her religious cultural heritage as she grew up with an American identity. She worked hard in Hebrew School, as her worn-out textbooks attest, and learned to play the piano, a skill considered particularly American by many working class immigrants.

Architecture
When the Shapiros purchased the house in 1909, it was well over 100 years old, like many neighboring houses. The house was built in 1795 by Dr. John Jackson a physician and apothecary. After Dr. Jackson's death in 1834, his widow continued to live in their home. By 1890 the house has been divided into a two-family dwelling and was probably a rental property. In 1909 when the Shapiros moved in, surprisingly few changes had been made to the building. The original two-over-two room plan was intact, although the original small ell has been expanded twice by the end of the 1800s to accommodate an updated kitchen.

In 1911 a fire destroyed most of the ell, and when the Shapiros rebuilt it, they expanded it to the full-width of the original house and added a small bathroom. After 1928, when the Shapiros sold the house, significant changes were made to the building. The 1795 stairway and chimney stack were removed, the parlor expanded, and the second floor plan reconfigured to create a third bedroom and a bath.

In 1996 and 1997, Strawbery Banke staff restored the house to its 1919 appearance. The restoration, exhibit and program, Becoming Americans: The Shapiro Story, 1898-1928 was made possible by generous support from the National Endowment for the Humanities, private foundations, and individual donors.