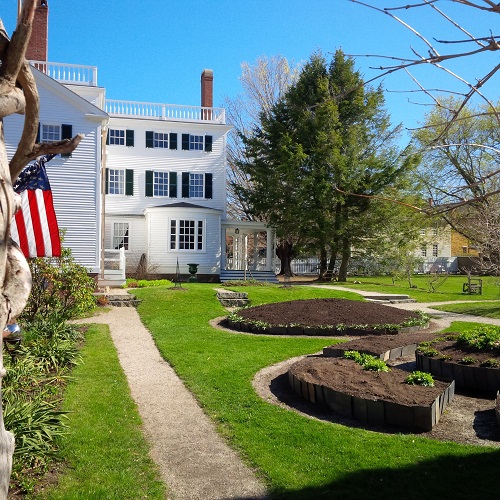 The Goodwin Family
Ichabod Goodwin purchased the house in 1832. Born in Berwick, Maine in 1794, Goodwin came to Portsmouth at the age of fourteen to work in the counting-house of Samuel Lord, a prominent ship owner, and merchant. He followed that trade, commanding his own ship, but left the sea in 1832 to become a merchant in partnership with Samuel Coues. He moved his wife of five years, Sarah Parker Rice Goodwin and their daughter, Abigail, into the new house.

Goodwin recognized that as Portsmouth faced the changes that would produce progress that transportation and trade would depend on the railroads. Appointed a director of the Eastern Railway of Massachusetts, when the line was extended north, he became president of the Eastern Railroad of New Hampshire. From 1841 to 1876 Goodwin served at the head of the Portland, Saco and Portsmouth Railroad, later to become a substantial part of the Boston and Maine (P1433-77).

But Ichabod Goodwin's greatest love was politics. After serving in the NH State Legislature for nearly twenty years, he became a Whig candidate for Congress in the 1850s. Although defeated, Goodwin was involved in the formation of the state Republican Party and was elected on that platform as Governor of New Hampshire in 1859 and 1860.

At the start of the Civil War, when President Lincoln sent an urgent request to the states for volunteers, the Legislature was not in session, so Governor Goodwin funded the raising of the First New Hampshire Regiment from his own pocket, to set a good example.  Ichabod and his wife Sarah opened their home to many prominent individuals, including President Franklin Peirce. Much of the interpretation of the Goodwin Mansion and garden is based on Sarah’s memoirs, which she began writing at the age of seventy.

In 1867 the Goodwins' daughter, Susan, married a young naval Lt. Commander, George Dewey in this house. Dewey would later gain fame by defeating the Spanish fleet in Manila Bay during the Spanish-American War. Governor Goodwin died in 1882; Sarah Goodwin in 1896.

Architecture
?The Goodwin Mansion was begun in 1811 by James Hazeltine, a bricklayer, who started construction on the Federalist-style house in 1811, apparently “on spec.” The area where the house originally stood was developing into an exclusive residential district and the new house was sold in 1814 for $3,000 (including a sizable profit).

Architecturally the Goodwin Mansion bears numerous classical elements of Greek Revival décor. The front Ionic portico probably dates Goodwin’s purchase of the mansion in 1832, as may the Doric side porch. The laurel wreaths on the portico are believed by biographer Jim Craig to have been carved by John Bellamy.  Most fireplaces retain the late Greek Revival or early Victorian marble mantelpieces and cast iron coal grates installed by Goodwin.

The most thoroughly Victorian room architecturally is the “best parlor.” This is the only room in the house which contains a plaster ceiling rosette, installed for a gas chandelier, probably shortly after 1850. The white marble fireplace bears anthemion ornaments, derived from the honeysuckle which first appeared in America in Greek Revival work, and it probably pre-dates the room's altered woodwork. The baseboard is typical of the Victorian era, and the pilasters which frame the windows and door bear capitals which are equally characteristic of the Civil War period. They have two elements: three acanthus leaves at the bottom, and five Egyptian-themed water leaves, above. These are widely found in Victorian work in Portsmouth and seem to have been copied almost directly from the late Corinthian order of the Tower of the Winds in Athens, first illustrated in Stuart and Revett's Antiquities of Athens in 1762.

The rest of the house retains the original Federal period wainscoting, window and door trim, cornices and the graceful spiral stairway in the front hall. The hall is lighted by a beautiful fanlight over the door, and its cornice is enriched by simplified mutules and by cable moldings.

Governor Goodwin's residence is furnished with items of various ages and qualities, to recreate as closely as possible the appearance of the house when he lived in it. Some of the pieces are Victorian; others, which had been in the family many years, are much older. The overall image is one of tradition, wealth, and elegance, an image that Ichabod Goodwin, who rose from obscurity to become one of the most prominent men in the community and the state, strove to present.

For information about the adjacent Victorian greenhouse, click here.

For information about the adjacent Victorian Children's Garden, click here.