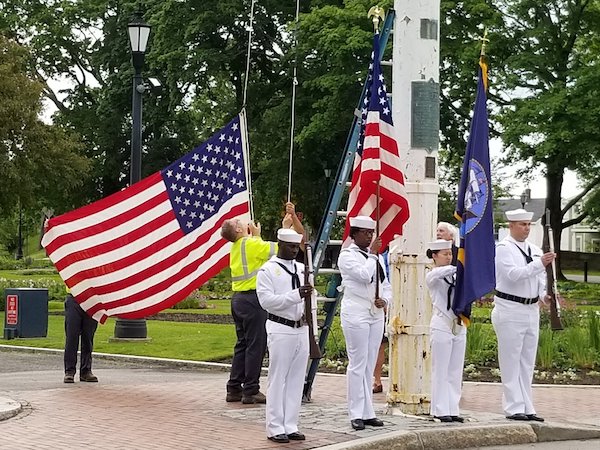 Join Strawbery Banke Museum, and alumni from Haven School, Farragut Elementary School, and North End school for a Flag Day commemoration. Members of the public are invited to assemble on the Museum side of Marcy Street at the edge of Prescott Park, opposite the Liberty Pole.

Festivities include a presentation of the colors by a delegation from the Portsmouth Naval Shipyard, the singing of the National Anthem by Angelynne Hinson, and remarks by Lawrence J. Yerdon, President and CEO, and Sherm Pridham, librarian emeritus of Portsmouth Public Library and former resident of Puddle Dock, who explains the significance of the event. Additionally, Angelynne Hinson sings the National Anthem. 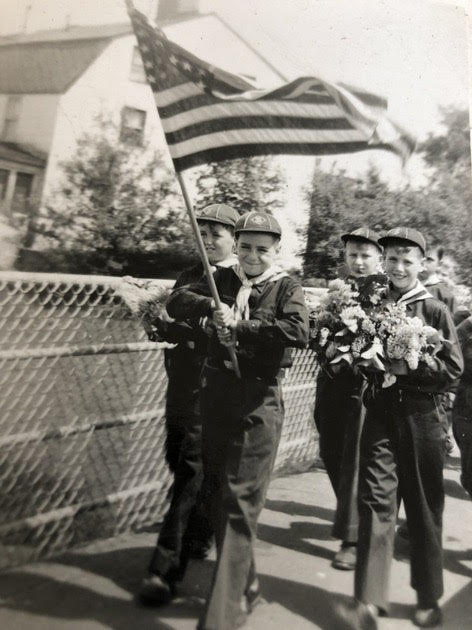 Pridham commented, “The celebration is being organized by a group of Haven School alums who hope to showcase the often-overlooked contributions local, and not-so-famous citizens, have made to Portsmouth's and the Nation's history and heritage.  The glib portrayal of Portsmouth before its economic successes, as simply a ‘sleepy’ or a ‘gritty’ town, is inaccurate and has affected, and will continue to affect, histories and accounts of Portsmouth's past. False assumptions can only lead to mistaken conclusions. The goal, then, is to provide opportunities to present and preserve more full and honest accounts of Portsmouth's more recent past. The Liberty Pole is a symbol for honoring the stories and lives of working people in Portsmouth neighborhood.”

“The Portsmouth Liberty Pole is visible in the earliest photographs of the Puddle Dock neighborhood that is now Strawbery Banke,” said Lawrence J. Yerdon, President and CEO. “The museum has taken part in several efforts to preserve this important, tangible symbol of Portsmouth’s eighteenth-century history. We are pleased to assist in reviving the neighborhood’s celebration of Flag Day.”

The Liberty Pole in Portsmouth is the oldest in America and is also a symbol of citizen engagement in times of war and peace, local initiative, and the “grassroots” efforts for which Portsmouth is famous. Portsmouth’s Sons of Liberty placed a flagpole on the spot where the current flagpole stands on January 9, 1766. Nine years before the beginning of the American Revolution, the Liberty Pole was a rallying point for opposition to the Stamp Act. The Sons of Liberty raised a flag on it with the motto, “Liberty, Property, and No Stamp.” This was the first flag protesting the Stamp Act in the American Colonies. Subsequently, the Liberty Pole was the focus of war and peace. On May 22, 1766, the town of Portsmouth celebrated the repeal of the Stamp Act by the British Parliament by placing a battery of twenty-one cannons nearby, dedicated to the King. Thirteen of these guns were fired on April 28, 1783, to celebrate the end of the Revolutionary War. The original Liberty Pole was replaced on the Fourth of July in 1824 and again on the Fourth of July in 1899.

Coincidentally, on June 14, 1777, the date Congress adopted the flag, Captain John Paul Jones assumed command of the Ranger, built in Portsmouth at John Langdon’s boatyard. The Ranger carried that ensign in harm’s way. Jones, his Seacoast crew, and the Ranger were the first to receive honors from a foreign nation (a French ship) when they carried the flag into international waters.

Strawbery Banke Museum today indicates which of its historical houses, interpreting life in Portsmouth from 1695 through 1955, are open for touring with a flag appropriate to the era of each house.