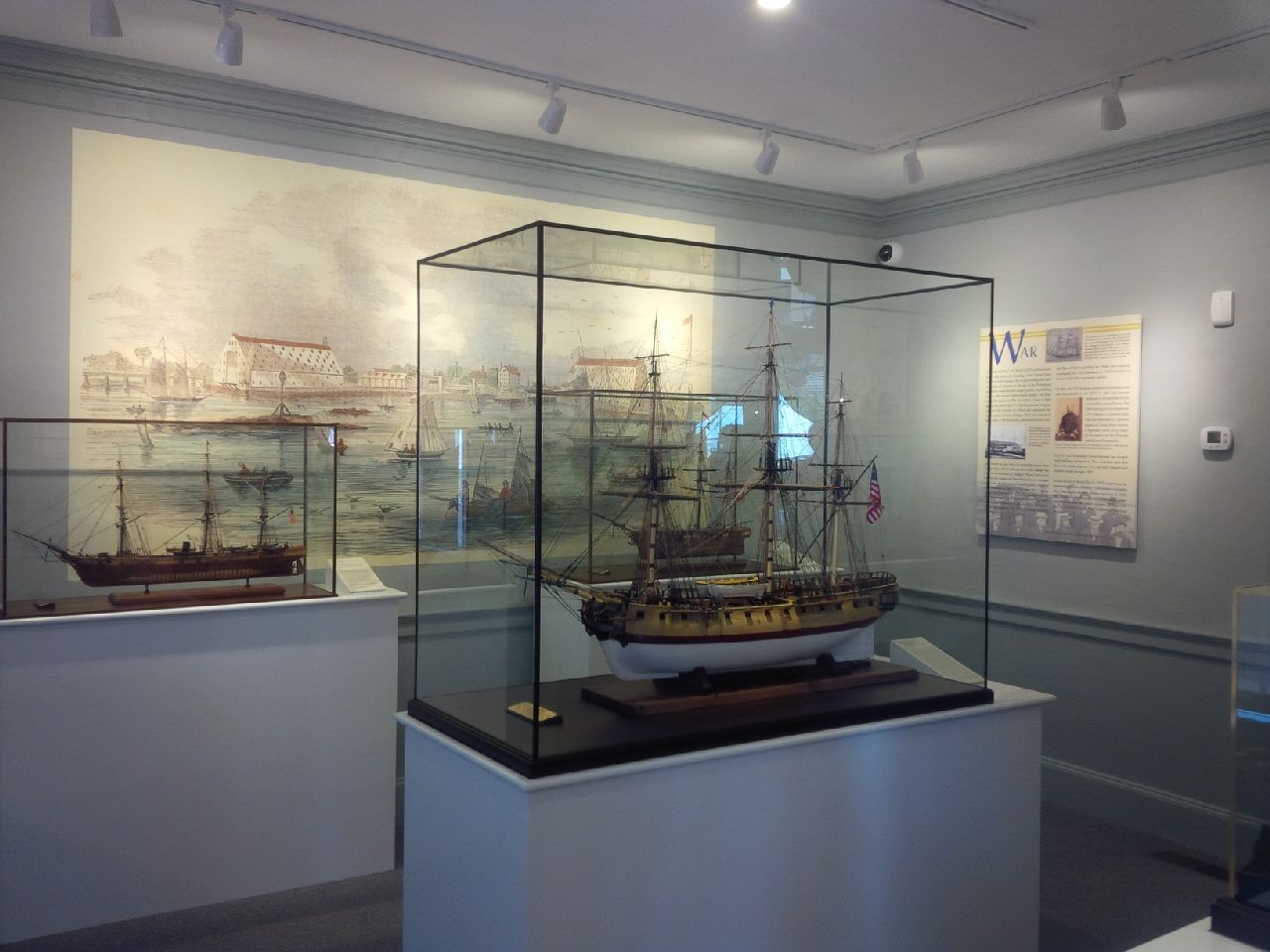 Portsmouth, New Hampshire (June 29, 2016) -- Strawbery Banke opens a new permanent exhibit, “Port of Portsmouth: War, Trade & Travel” on July 1, 2016 in the new Montrone Family Gallery in Thales Yeaton House. The exhibit focuses on the maritime history of Portsmouth and the Seacoast, showcasing a collection of models and paintings of ships built in Portsmouth and the stories of those who sailed them.

"Port of Portsmouth" explores the breadth of maritime history associated with the seacoast of New Hampshire/Maine and its influence on the lives of those who lived in the neighborhood of Puddle Dock now occupied by Strawbery Banke Museum. The waterfront neighborhood of Puddle Dock supplied the workforce to build commerical and naval vessels at boatyards on the Piscataqua River, (including America’s oldest Navy Yard, the Portsmouth Naval Shipyard). Trade goods from around the world were brought to Portsmouth docks and Puddle Dock shops by the masters of sailing ships.  Eighteenth century letters and captains’ artifacts reveal the Portsmouth roots of the Continental Navy (including John Paul Jones residence in Portsmouth in 1782); while sailors’ accounts from aboard the USS Kearsarge provided insight into the American Civil War.

The Sawtelle Collection, memorializing local philanthropists Joseph and Jean Sawtelle, anchors the exhibit in the Montrone Family Exhibition Gallery.  Joe Sawtelle spent a lifetime exploring, collecting, researching and teaching the maritime history of Portsmouth. An anonymous benefactor recently donated a selection of Sawtelle ship models depicting the flourishing ship-building tradition in Portsmouth to Strawbery Banke.  Models, including the Raleigh (the centerpiece of the official Seal of the State of New Hampshire), Witch of the Wave, the Nightingale, and USS Kearsarge, give life to the sheer size and complexity of life aboard ship.  Stoneware jugs from 1700s and 1800s shops offer insight on how goods like rum and molasses finally made it to domestic homes after a long journey.  Navigational tools, including a Portsmouth-made quadrant, compass and sextant that set sail with Portsmouth ships, tell us how captains guided their vessels around the world and home again.  Personal items, including a gold engraved mourning ring owned by Captain James Hickey, reveal imported social customs.  Fine art portraits of Portsmouth-related ships, such as the Sarah Parker Rice, named by Gov. Ichabod Goodwin for his wife, echo themes found elsewhere throughout the museum.

The exhibit is located in new exhibition space in the Thales Yeaton House, created thanks to a major gift from The Montrone Family. The exhibit was funded by grants from the Roger R. and Theresa S. Thompson Foundation Fund, The Davis Family Foundation and an anonymous donor who helped Strawbery Banke Museum realize Joseph Sawtelle’s vision of creating a maritime history exhibition permanently, housed in Portsmouth.

Strawbery Banke Museum, on the historic Portsmouth, New Hampshire waterfront, is a 10-acre outdoor history museum dedicated to bringing 300+ years of American history to life through heritage gardens, historic buildings, traditional crafts, preservation programs, hands-on activities, stories told by costumed role-players and the changing exhibits that offer hours of fun and discovery for all ages.  A 501©3 non-profit, Strawbery Banke’s daily programs, exhibits, seasonal outdoor ice skating and signature special events throughout the year are made possible by members and by grants from Proulx Oil & Propane, R.M. Davis, CP Management, the NH State Council for the Arts, the NH Charitable Foundation, Lincoln Financial Group, the Institute of Library and Museum Services and many other individual and corporate donors.  For a complete calendar of events, please visit www.strawberybanke.org